Garment factories in Bangladesh had to import huge quantity of necessary denim cloth from China or Pakistan as they couldn’t produce good quality denim. Some also came from India. But the scenario has been changing rapidly after the establishment of new denim factory. Now the situation has changed a lot in the last few years. Bangladesh is now producing about half of its demand, which will increase in the coming days.

Bangladesh has now been advanced a lot not only in fabric production but also ahead in fabric washing. Washing is a particular method that can change fabric appearance and sense. It mainly used in denim garment production. Now it is possible to produce many types of clothes and can implement verity of washing methods. Even we can deliver denim fabric to make T-shirts. Fabric quality of our country is not less than China and Pakistan. Thus, big buyers in Europe and America have an eye on the expansion and capacity of Bangladesh denim sector. As a result, we have a vast opportunity to open the door of $ 60 billion global denim market. 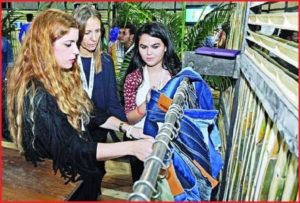 An exhibition was held on Wednesday at the International Convention Center of Bashundhara City (ICCB) to emphasize the ability of Bangladesh denim sector. The exhibition was organized by Bangladesh denim Expo Company Limited and named it “Bangladesh denim expo.” At exhibition many officials of the denim makers said, the investment to produce denim fabrics is increasing day by day. Almost all of the existing plant had increased their production capacity; some new entrepreneurs are preparing their investment plans to set up modern denim industry.

At the exhibition representatives of the major buyers in Europe watched the capacity grades of local denim producers. They did a feasibility study by talking with the fabric makers regarding denim procurement. According to the information of the concerned company at present Bangladesh can produce better quality denim fabric comparing to the China suppliers. They also said they could provide the standards what our garment factories are using currently. Moreover, Bangladeshi garment exports are interested in using local denim fabric because it takes less time comparing import from abroad. The exhibition organizers said, now the country has about 25 denim textile mills. Altogether there are more than six hundred million take investments in this sector. These mills can produce about three hundred sixty million yards of cloth per annum. However, imports have to import about four hundred twenty million yards of cloth from abroad to cover the demand.

We have about 400 garment factories, and they are exporting about 180 million pieces of denim garments a year. On the basis of jeans export to the European market, Bangladesh got the second position behind China. Bangladesh got the third position in the US market. Vice-president Bangladesh Garment Manufacturers and Exporters Association (BGMEA) Mohammed Faruq Hassan said, “Now we can do everything except design. We have learned denim manufacturing task; now several sorts of denim clothes are made in Bangladesh. Standard of washing has improved and got diversity. Bangladesh has modern equipment’s and technology. The progress of the denim sector will be advanced very fast in the coming future.”

Square Denim Ltd. is the latest stuff in denim sector in Bangladesh. They have started commercial production in October 2016. They used to produce yarn in last few years. From now on they will produce high-quality denim clothes in their factory at Habiganj in Sylhet.

Daud bin Jafar, Deputy Manager of Square Denim Ltd. said, “Expensive clothing sales organizations in Germany, Hugo Boss representatives has visited their industry. Some factories in Bangladesh are now producing another renowned denim brand Levies. Another three buyer’s representative Next, OVS Italy, KGS sourcing has talked with Square Denim authority in the trade fair. He said “if the clothes imported from the abroad that will cost much, but we can deliver less time and fewer prices. As a result, foreign buyers are feeling interested in buying from Bangladesh. ”

Mr. Delwar Hossain, Deputy General Manager of Mahmud group said, “Now the Chinese are not interested in producing basic denim. They are creating fashionable denim. As a result, Bangladesh has an opportunity to expand their strength.”

Mr. Nazrul Islam, Assistant General Manager of Mahmud group said, “Usually a buyer will give three months time of a garment factory to accomplish the order. Suppose, if a factory tries to import their required goods from abroad that will take much time. Bangladeshi factories can deliver much faster than that. Bangladeshi denim cloth is the first choice to the buyers considering fabric quality, cost and lead time. That’s why demands of this country denim fabric are increasing day by day.

Mr. Morshedul Islam, executive of NASA Denim said many renowned buyers like Lives, Zara, C&A, H&M, K-Mart, Walt-Mart, and George had visited their fair stall. Many of them are now using Bangladeshi cloth for making garments.

Mr. Faruk Hasan, vice-president of BGMEA said several high-value buyers like Amstar denim, KBL, Denim mad house; DR Denim had visited this fair. Beside this, another fair organizer named ‘Kinpinsso’ founder Mr. Andrew olaha has come to watch Denim Expo. Faruq Hassan said, “Who would never think to visit this country before, now they are feeling interested by watching the growth of Bangladeshi denim sector.” Total 40 companies of 12 countries have taken participation in this Denim Expo exhibition including Bangladesh, United States, China, India, Thailand, and Turkey. Organizers of denim Expo Bangladesh are pleased to watch the interest of participating companies.

You may like: Square has introduced supreme quality denim for high-end users