The factories of Pacific Jeans Group are producing about 1, 25,000 pieces of jeans pant every day that will accumulate about 36 million pieces of jeans in a fiscal year. It is situated at Chittagong EPZ, Bangladesh. Mr. Nasir Uddin, Founder Chairman and Managing Director of Pacific Jeans are behind this gigantic task. His eldest son, Syed Mohammad Tanvir is now going to accompany him wisely. His latent talent and ability are developing day by day under the shade of his prominent father’s. As a result, he was selected as the youngest CIP in 2011 among all in the country. Recently, considering their grand contributions to the country’s national export, Prime Minister Sheikh Hasina honored both of them and handed over two gold and two silver trophies. 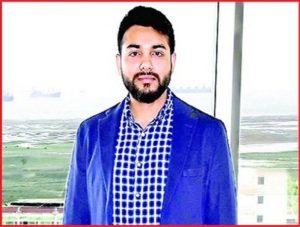 But it did not stop the progress of this young entrepreneurs dream. Thus, one and half month ago he quit old CEPZ office to build a modern corporate office and transferred all official tasks to that NHT fashion house. His office is well furnished, and the endless dark blue bay is aside from the eighth-floor window of his HQ. Merchant ships are available at that outer anchorage. He told us a lot of dreams regarding Pacific jeans upcoming plans.

Now his target is to gain the number one position in the world of jeans production to fulfill his father’s dream. The journey of Pacific Jeans Limited began in 1984 at Patharghata fisherighat with the small ‘NZN fashion’ in Chittagong city. Only 500 workers were employed at that starting time. The first fiscal year, the amounts of exports were only one and a half million dollars. Now about 30 thousand people are employed directly in Pacific Jeans. Last 15 years, this group’s annual export growth rate is about 15 to 20 percent.

Pacific Jeans chairman, Mr. Nasir Uddin, is a Visionary person. He was the first jeans producer in Bangladesh. He is an icon in this sector. He had been able to predict the opportunities of global jeans market. In 1984, he first started ‘NZN fashion’ with just 500 workers at Patharghata fisherighat in Chittagong city. At that time, he worked for an Italian buyer. Washing was the first priority of jeans mechanism thus in 1986; he established first washing plant in our country. Many entrepreneurs have come forward after watching his success.

The current market value of Denim sector of Bangladesh is about three and a half billion dollars or twenty-eight crores Taka. Government has set a target to make it double by the year of 2021. According to the source of BGMEA at present, we have about 500 factories in Bangladesh, who are directly involved with denim export business. They can export about 400 million pieces of clothing each year to several foreign countries. Among them, about 36 million pieces of jeans pant are being exported from the Pacific Jeans Limited to Europe, America, Japan and more than 50 countries around the world.

Currently, 12 percent of the total export values of jeans garments of Bangladesh are contributed by Pacific Jeans Ltd. according to Mr. Syed Tanvir. However, their goal is more forward. At least two new factories in Chittagong EPZ of this group will step in production by 2020. He long for Pacific Jeans annual production capacity will be promoted to 60 million pieces at that time. Mr. Tanvir said, “We will be number one in the world for jeans production in the course of time. Our Philosophy is to be specialized.

We are still very near to the top. Our vision is very clear. But soon Pacific Jeans will become number one in jeans production in the world.” Mr. Tanvir, director of Pacific Jeans Ltd. Said, “All credit goes to the teamwork that was behind this success.” He said, “I have confidence on three ‘P’ that is people, process, and product. We have developed a corporate culture in Pacific Jeans Group. Everybody has the power of authority to handle an individual case. However, we have been trained them to develop their confidence regarding decision making. Our recruitment policy is very clear and transparent. From there, we select the best candidate among all. We always give priority to skilled, energetic candidate.”

Tanvir thinks, “Talent and creative team are essential for continuous success. Each member of our organization devoted themselves to achieve a particular goal. It’s all about a team work for excellence. The smart working environment what we deliver to grow their qualification, experience and intellectual development is exceptional. Thus, Pacific Jeans has become a hub of country’s best talent, intelligent and creative young people.”

Once upon a time buyers would like to visit Bangladesh only for cheap denim items. The situation has changed much. Now Pacific Jeans Ltd. is capable of producing several kinds of jeans items from the middle to premium quality. According to Mr. Syed Tanvir, “Retail price of Pacific Jeans items are about $50 to $150. Pacific jeans are unique than many other denim factories considering their performance. We have a separate individual department named “Pacific Jeans Innovation Center.” A bunch of designers is always busy there to generate new design. About 60 skilled foreigners are working in this Innovation Center. Syed Tanvir said, “Usually buyers chose about 65 to 70 percent from their innovated design.”
Though Pacific journey had begun in 1984 at Patharghata; but in 1994, it set up a factory in Chittagong EPZ with one thousand and five hundred workers in the name of Pacific jeans Ltd. After that, it’s time to go ahead. Now we have only five factories only in Chittagong EPZ.

Currently, our country has eight special economic zones in several areas, and there exist about 582 domestic and foreign-owned companies. We got the second position among all after South Korean based Young-one group. And just in Chittagong EPZ, we are large considering our business volume. BEPZA is EPZ regulatory authority, and they are very pleased with us as a domestic firm who are making competition with many other foreign companies. Whenever any local or foreign guest wishes to visit CEPZ factories, CEPZ authority must bring them to us to watch our activities.

You may like: Sustainable Renewable Energy for RMG Industry